I again was lurking away at my stats and saw this. It sparked my curiosity so I went a looking and was pretty stoked to find my little ole blog mentioned on its pages. Its a list of lady bikers who blog about their experiences. I am now following a ton more women and have a lot more reading to do. I prolly should start riding again. I haven't ridden much since my wreck. I actually busted my knees worse then I had originally thought and its just been too painful to deal with.

Also on that page it says I am based outta Australia...Im not really yall dont be confused lol. I wish I lived there that'd be rad as all get out.

Anyways who is stoked for Turkeyday?? I sure am! I have been cooking my jolly little butt off.
Put here for your reading pleasure by Kelley Kronic at 7:13 PM 2 comments:

I was trolling the interwebs and found this wise piece of reading. Didn't have a source for it but whatevs. Its pretty much a great little bit of encouragement that I took to heart.
Cut your losses and don’t waste your time . Why stay in some weird dating limbo when you can move on to what will surely be better territory? Don’t want to hear it? Fine. Here’s the answer you’re looking for, “Hang in there, baby. He’s not the loser everybody’s telling you he is. If you wait and keep your mouth shut and call at exactly the right time and anticipate his moods and have no expectations about communication or your own sexual needs, you can have him!” But please don’t be surprised if he dumps you or continues to drag you through a completely unsatisfying relationship.
He is a man made up entirely of your excuses. And the minute you stop making excuses for him, he will completely disappear from your life.
Men, for the most part, like to pursue women. We (men) like not knowing if we can catch you. We feel rewarded when we do.
Don’t let the “honeys” and the “babys” fool you. His sweet nothings are exactly that. They are much easier to say than “I’m just not that into you.” Remember, actions speak louder than, “There’s no cell reception where I am right now.”
Calling when you say you’re going to call is the very first brick in the house you are building of love and trust. If he can’t lay this one stupid brick down, you ain’t never gonna have a house, baby. And it’s cold outside.
He will always be able to play the “friend” card on you. He only has to be responsible for the expectations of a friend, rather than the the far greater expectations of a boyfriend. He’s got the ultimate situation: a great friend with all the benefits of a girlfriend, whom he can see or not see whenever he wants to. He may be one of your closest friends, but I’m sorry to say … as a boyfriend, he’s just not that into you.
I don’t want to be “sort of dating” someone. I don’t want to be “kinda hanging out” with someone. I don’t want to spend a lot of energy suppressing my feelings so I appear uninvolved. I want to be involved. I want to be sleeping with someone I know I’ll see again because they’ve already demonstarted to me that they’re trustworthy and honorable — and into me.
Don’t be flattered that he misses you. He should miss you. You’re deeply missable. However, he’s still the same person who just broke up with you. Remember, the only reason he can miss you is because he’s choosing, every day, not to be with you.
It’s very tempting when you really want to be with someone to settle for much, much less — even a vague pathetic facsimile of less — than you would have ever imagined. Remember always what you set out to get and please don’t settle for less. These guys exist because there are a lot of women out there who allow them to.
Hey girl. Put down the penis, put your clothes back on, and go directly to your best friend’s house. Do not find an excuse to stay. Do not think that because of all the crazy hotness of it all, it now means that you’re meant to be together. Yes, break up sex does seem like a good idea, because hey, it’s nice to have sex with someone you have these dramatic feelings about. It makes it all, well, dramatic. But now you know. It confuses everything and makes you separate sex and emotions. So now you don’t ever have to make that mistake again. Got it? He’s into the very-bad-idea-that-masquerades-as-a-good-idea, breakup sex. Over and out.
He’s sniffing for something better, and when he doesn’t find it, he gets lonely and comes “home.” It’s not that he’s so into you. It’s that he’s so not into being alone. Don’t give him the chance to break up with you for the fourth time. (Even the idea of it sounds beneath you, doesn’t it?) Reset your breakup maximum to one and move on.
Cut him off. Let him miss you.
He doesn’t need to be reminded that you’re great.
There’s a guy out there who’s going to be really happy that you didn’t get back together with your crappy ex-boyfriend.
No matter how powerful and real your feelings may be for someone, if that person cannot fully and honestly return them and therefore actively love you back, these feelings mean nothing.
Being lonely … being alone … for many people … sucks. I get it, I get it, I get it. But still I have to say that yes, my belief is that being with somebody who makes you feel shitty or doesn’t honor the person you are is worse.
Life is hard enough as it is without choosing someone difficult to share it with.
You deserve to be with someone who is nice to you all the time.
Put here for your reading pleasure by Kelley Kronic at 4:17 PM 3 comments:

Yall prolly already read The CityBirds Nest but just in case you dont you should go ahead and do that.

Its pretty darn rad if I do say so myself. I mean who doest like hedgehogs?!!
Put here for your reading pleasure by Kelley Kronic at 4:00 PM No comments:

I was looking at my traffic sources...I have the most random ones. Like ( bestbabymonitors.info ) I mean what are you and how did you find my blog from that site?? I am very curious. Also people find me from very strange search words like blue bike or ugly interview shirt. It also really creeps me out though when someone will look up something correct like KelleyKronic nashville tn...so exact dude. WHO ARE YOU!!!??

This week has been one for the story books. October is always weirdly a hard month for me and this year was no exception. It started and ended with a bang. I guess technically the worst bit happened on the beginning of November but whatevers.
One of my friends Josh is hitch hiking across America with one of his friends Kevin. Josh had planned to come stay with me a few days and was supposed to get dropped off in Nashville. They ended up not being able to get a ride so I offered to drive the 2.5 hours to Henderson Ky to come get them. I got all the way there, only getting lost once, picked them up at an Applebees got about 10 minutes down the road then I literally blinked and I had an airbag in my face and my car was spinning out of control.  When the car finally stopped we were stunned and choking on the airbag dust. I had to force my door to open a little bit so I could squeeze out. We looked around and didnt see a dang thing that we could of hit. Finally a man comes running up and is like are yall ok? We were all uh yes what happened. Apparently he had been stalling, tried to get on the left side of the road from the right side and slammed into us, his car stopped and mine hurtled on down the road a good 100ish yards until stopping in the median almost in oncoming traffic. As you can see in the picture most of the left front side is gone along with a ton of other things. My poor baby car that I just spent almost a grand fixing up is now demolished and gone.
It was one of the most horrifying things Ive dealt with. I was terrified my passenger friends had been hurt and it had been my fault. Im still beating myself up about it all.
I am very grateful I had those two boys with me. I was pretty out of it and they immediately stepped up to get it sorted. They made sure I was ok first and stayed by me and gave me hugs the entire time. I didnt realize how import human touch was but it definitely kept me grounded and made me feel a ton better. I'm not used to being taken care of or treated that nice. I really cant express how grateful I am for them.
After every thing was taken care of we got taken back to the where i picked them up and waited till my dad came to get us.
I got to spend a few days with them, they left yesterday. I had to stop myself from crying. I definitely always have a hard time when friends leave. I always get emotional and wish the world was a bit smaller. I am a silly little person I suppose. I guess its really rare to find good people and when it happens its hard to watch them leave. Oh well. I am alive, they are alive, the people in the other car are alive, things will get better. Ill be ok in a few days. Life is good. 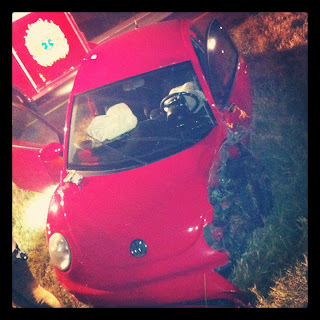 Put here for your reading pleasure by Kelley Kronic at 11:24 AM 5 comments:

Kelley Kronic
I spend my days dreaming about other days. I ride bikes, cross stitch and cuddle my sweet chihuahua Loki. Im basically an 80 year old trapped in a 23 yr old body. Its getting cold in here.